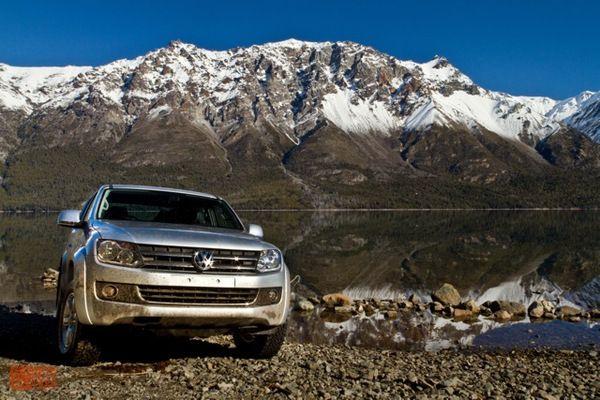 As part of the PR partnership with Volkswagen Commercial Vehicles, Eventum Premo has repeatedly organized press tour support for Russian media. Over the past 2009, we carried out no less than 16 additional projects, each of which became a real event for the press: Hanover Motor Show, Frankfurt Motor Show, test drive of the new T5 in Italy, exclusive press tour to the Dakar Rally, tour to the premiere tests of the new Amarok in Cordoba (Argentina) and many others.

Amarok is Volkswagen's first pickup truck. Its target market is South America, but it’s not a secret to anyone that there is a certain fashion for pickups in Russia - this is their own style, even more than the need to have a cargo compartment of 1.5 tons.

So, the Volkswagen Commercial Vehicles brand organized a large-scale run on the new Amarok along the roads of Argentina in Argentine Switzerland (as the Argentines call this place) in a cozy and beautiful place Bariloche.

The “opportunity to steer” a novelty fell to the share of 300 media representatives, among whom were Russian journalists from the top automotive publications: “Behind the Wheel”, “TopGear”, “Auto Review”, “Klaxon”, “Quatroruote”, “Autoworld”, “Auto Panorama” "," Buy Auto "," 5 Wheel "," 4x4 All-Wheel Drive "and others. “Sharks of a feather” proved to be real off-road predators with the habits of genuine racers, which became possible due to the technicality of the new Amarok. Active activity on the road gave way to no less active communication between the organizers and journalists during the press conference and as part of the dinner. This was for us (representatives of the Russian traditions of PR communications) a bit unexpected when we were invited directly from the rostrum to dinner and the Sales Director in Europe and the CIS sat at the same table with us, and sat down at the next table with another group of Russian journalists Chairman of the Board VW NFZ. We decided that after the press conference, journalists ask questions, and then a group of organizers separates and talks to each other. Another mechanic was applied here: the speaker himself came up and asked if he could join us, he began to talk about the "secret prices", "secret facts", thereby creating a fire in the eyes of journalists and making our dinner really interesting. I can say that it works great, but with two factors:

- it must be a competent or authoritative representative (the Director of Communications, who certainly developed a marketing strategy and created the presentation concept, unfortunately, does not fit, a design engineer is better)

- this should be a group of media no more than 10 people, otherwise they begin to talk among themselves and do not listen to the answers of the speakers / s, the discussion does not develop, and the speaker can not hold the attention of all participants.

The program of the press tour assumed 2 free days, it was more a necessity than a bonus for the participants of the tour, since the flight to Buenos Aires takes more than 24 hours. One day, we provided for free time and an evening visit to the best tango show in Argentina with dinner, and on the second day we arranged a city tour. Journalists travel a lot, and it's hard to surprise, but we succeeded, both thanks to the test drive of the new model, and thanks to a carefully thought-out tour, during which they were able to see the beautiful city of Buenos Aires. After all, to visit Argentina does not mean to see Argentina; unfortunately, most often this happens with journalists.

In addition to pleasant fatigue, everyone present had a storm of emotions and impressions, and the views of the picturesque town of Bariloche and Buenos Aires helped not only emotionally “refresh”, but also experience New Amarok in all its glory.